This blog post has received great help from Claus Møller and Henrik Bruun their insight on composition, painting and composition has been a tremendous help writing this blog post.

Composition through shapes, if this sounds intriguing then read on, and if not, give it a chance anywayJ. This post is in the category of advanced compositional photography, and even though you might think it’s of no use to you, is it something your brain constantly decode. The reason for this is that our minds are geared to recognize shapes, wired that way at the deepest level.  When we can recognize shapes and see them balanced on the page, we feel good about the image, even if this happens at such a deep subconscious level that we aren’t aware of the analysis going on internally. When composing an image, the addition of geometric patterns or basic shapes such as lines, circles, squares and triangles can add structure and organization within that photograph. It helps us as a photographer translate an idea or feeling to the viewer. This blogpost builds on top of two former posts. The first addressed diagonals, and second when we are impressed about a photo, which is about asking the right questions sharpening our learning process.

Before we dive into shapes, it is important to understand there is two main categories of shapes: Organic and Geometric. Geometric shapes are circles, rectangles, squares, triangles and so on – have the clear edges one achieves when using tools to create them. Most geometric shapes are made by humans, though crystals are also considered to be geometric despite the fact that they are made in nature. Organic shapes are shapes with a natural look and a flowing and curving appearance. Their form are typically irregular or asymmetrical, and can be associated with things from the natural world, like plants and animals (read mere on my blog on Organic Shapes and photography).

As a photographer we can use organic shapes and geometric shapes in different ways: If we want to convey a photo that looks natural, flowing, soft or calming, organic shapes are generally the shapes of choice, but if we want to create a sense of chaos, anger, or rigidity, geometric shapes are used. I am not going to dive deeper into organic shapes in this post instead I am going to focus entirely on geometric shapes and how they can provide harmony and coherence to your photographs. Let’s have a look at circles, rectangles and triangles and talk about how these geometric shapes affect how our pictures is perceived by the audience. And do remember, there are two basic forms of geometry in photography, true and perceived.  A true form would be the rectangular window or doorway on a house. A perceived triangle could be three people in an image that when connected by an imaginary line form a triangle. Which form is used weather perceived or true depends on the opportunity presented to the photographer at the time.

How come it affects our audience

The idea about photographical elements is that you as a photographer consciously chooses to use these elements’ to unconsciously move your audiences away from using their analytical logic to the brains right creative capability. Our analytical mindset loves to label objects, knowing how to bump our audience focus over in a creative mode, is to force them perceive shapes as they would look in a 2-dimensional plane.

What a circle in a photo does to your brain

There is something disturbing about Circles, it’s not often they appear in nature, but when they do they have an interesting effect on us. No matter if its rings in the water, flowers or photos of our planet/sun/moon then circles affects us. Circles also occurs frequently in our artificial environment, from paintings on the wall, to wheels on bikes, circles is everywhere and nowhere, we need to train our eyes to identify them as a potential. Circles has the ability to move our mind from analytical logic to creative focus. We see we understand ovals as circles by translating the difference into a perception of perspective.

This is true in the Ferris wheel below (by Gary Plummer), the oval of the circle is translated into a perception of depth. The circularity of it is pleasantly emphasized by its juxtaposition with the rectangular frame of the photo. The abruptness of the frame’s right angles provides a contrast to the smoothness of the curves. Circular objects within square frames can be particularly appealing, as both shapes are perfectly symmetrical, yet very different. Notice how the Circle controls the attention. Usually the effect is most appealing when the circular formation is subtle, perhaps barely noticed consciously by the viewer. In this case it is especially appealing by its contrast to the rectangular, and triangular shape of the frame.

When shooting a Ferris wheel, the radiating patterns often function similarly to circular ones. They might suggest movement bursting outward. And they will beckon the eye towards a central point, while also creating rhythms that please the eye.

Their circularity has an inherent appeal, which can be both symbolically or a purely visual level. Circular things are worlds unto themselves. Their symbolism grows if there is more of them in your photo as they might suggest joining, separating, cooperating, competing, or colliding.

Rectangles and Squares, balance and tranquility

Where circles introduced movement rectangles offers harmony and coherence to a picture. Squares calms the brain while it allows your creative side of the brain to nourish the mathematician in the brain. We feel balance and tranquility. Another things about Squares Is that they makes such excellent frames, and also provide incredible interest with repetition.

Buque escuela Guayas de Ecuador
by Jens Jensen is a terribly good example of how well implied frames can work together with triangulated lines. The choice of a slow shutter, giving motion blur to the photo works really well for the photo. The masts and ropes creates heaps of geometric patterns and because these geometric patterns involve repetition we feel linearity, movement, and a sense of direction.

Triangles, a stability or instability

Sometimes they can be quite subtitle, often they are not outlined but implied. Even if you think they are not present then you can rest assure that they are, triangles are in almost everything we see, in one way or another. Our tasks as a photographer is to distinguishing them, and use them to our advantage. Triangles is perhaps the easiest compositional tool you can use, they are dead easy to make. The strength of Triangles is that they combine different compositional techniques. By using lines and patterns to form triangles we can draw attention and create a more interesting part of a photograph. But that’s not all triangles can create a feeling of stability or instability.

If you want to create an unstable feeling in a photograph, a quick and easy way to do this is to include an upside down triangle, this can distort the picture and make the viewer feel disoriented without knowing why. Triangles like this are really good at drawing attention to something seemingly insignificant and therefore making the photo more interesting.

Isbjerget housing project in Aarhus. Its triangles over squares in triangles has been much debated. Shooting through a white sculpture, gives plenty of negative space to the photo, and at the same time utilizing its holes as framing. The space is said to be “trapped” when the positive space encloses it. The frame plays an important role in shaping negative space. The frame bounds the negative space on the outside, while the positive space bounds it on the inside. It is fun how we adults has developed a perceptual blind spot for framing, my kids notice the effect of the frame on composition more quickly. We adults has to our eyes to see them and use them. As you can see ads framing to the intenseness of the photo. Squares, Triangles and oval circles works really well together. The circle keeps our attention within the frame, the upside down triangles gives a mixture of a sense of stability and instability. 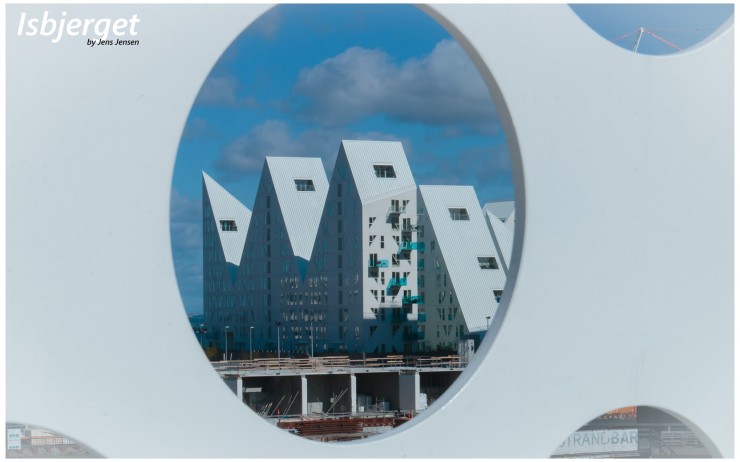 If you enjoyed this blog, then do read on about Organic shapes and photography.

1 thought on “Geometry and Photographical Composition”