.. Not being a big fan of fish without its original flavour, I seldom put the fish meat into the soup, I much prefer adding it just before serving. This blog is not going to focus on how to make the fish stock. There is plenty recipes for that, or cheat as I do buy the stock as your local fish pusher

Vegetables in the recipe to make the most of what you have on hand as this soup is extremely versatile, I prefer using Parsnip, Red cabbage, Leek, Onions, Tomatoes, Carrot, chopped into 1cm cubes and fried in a Dutch oven. And make simmer until the vegetables flavours is released into the water. Then reduce flavour with salt and pepper. 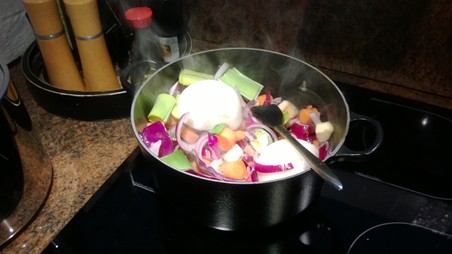 When the soup is almost ready prepare the fish, I prefer to use the Ling, while it has a nice texture and flavour to it. Season it with salt and pepper and bake it in a preheated oven for 15 min at 160c.

I usually like adding squid and fresh finely leek rings to as a final decoration, just before serving