Walked into Bologna and felt my heart swell with happiness. Its almost like you can almost feel the city pulsing with life through the camera lens, which by the way was thee Carl Zeiss Jena Flektogon 35mm (The Jewel). The streets is breathtakingly beautiful, yet rough around the edges. with its well over 37 kilometres of porticos Bologna is a unique city in the world. These porticos make it easy to stroll around the city centre, go shopping or walk from one museum to another under a safe shelter away from the scorching sun.

The origin of porticos is the sporto, a protruding wooden structure which was usually built in order to extend the inner living space of the upper floors. These structures then grew bigger and heavier, so that it was necessary to prop them up with wooden beams which inevitably occupied the street. Today it is still possible to see some examples of these first porticos in the historical centre.

Parking in the historical center is easy and convenient. Perhaps it would have been wiser and better to park outside and use one of well connected public transports to the historical center. Besides being costly there is also The Limited Traffic Zone of the Historical Center (ZTL), where movement of motor vehicles is restricted

On the right Palazzo del Podestà which construction began in 1200. In the center the facade of Palazzo D’Accursio.

Standing at the busy Piazza di porta Ravagnana trying to capture moment isn’t the easiest of tasks. the Asinelli tower is one of the few towers built in Bologna at the end of the 12th century that still survives today. The Garisenda tower is next to it (leaning tower) but it is closed to the public.

Here in front of the Cattedrale Matropolitana di San Pietro is the cathedral of Bologna, entitled “Metropolitana” the origins of the building may be traced back to the beginning of the Christian era (even though it is said that the church already existed during the 10th century). Throughout the centuries the cathedral has underdone many changes: first a fire and then a earthquake destroyed it, in August 1131 and in 1222 respectively. I was trying to capture the cathedral to capture the life going on in front of it. It took me a series of 12 shoots todo so, handheld, I hope you will still enjoy it with all its photographical imperfections. with its magnificent façade. This cathedral is the fifth largest cathedral in the world and houses the world’s largest sundial.

Seat of the Chamber of Commerce, Industry, Agriculture and Crafts, Palazzo della Mercanzia has governed trading and business activities of Bologna since the late 14th century. The building was completed in 139. The façade shows two deep Gothic arches, uplifting it, as further highlighted by the raising of the level under the porch with the respect to the surrounding square. Over the arches, a small marble balcony juts out between the two mullioned windows.

In each street, with respect to history and architecture, is small high end shops dealing with quality food or quality products. In the streets is served food which origínate from the city.

Statue of Ugo Bassi in Bologna, Via Ugo Bassi 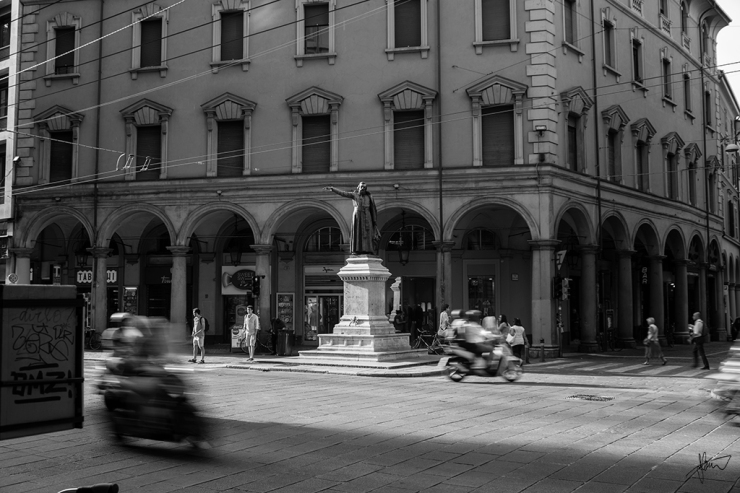 Bologna has for me been a overlooked city, for years was the place we could go to but never really went for. home to some of Italy’s best food but still pretty cheap, cultural and enthralling and incredibly conveniently located, yet still off the beaten path for most tourists in Italy.

!Bologna is perhaps the highlight of this years Italian visit!