Hi again, this time we are going prepare for a full lunar eclipse. The entry is a part of my preparation for this event, which occurs the 27 September / 28 September 2015. My idea is to shoot the full lunar eclipse cycle, on a silhouette of an ancient castle. Then to merge the exposures into a one single frame in the post processing process. I am cross my fingers for a clear sky, and hope to see as many stunning captures around the world as possible.

Planning, Where and when

With all night shape photography is 90% of the task preparation. Knowing when is obviously important, but also where. I am planning for a distinctive silhouette. This requires good planning in order to position myself correctly, to get the silhouette as well as all lunar phases in one frame…

This sets demand on how wide I want to shoot, and the exposure length while I want to avoid star trails, and have the moon with as much detail as possible. I recommend practicing one or two nights before the eclipse. The moon rises about 50 minutes later each night, so it is easy to calculate when you need to be out. The moon appears to move across the sky at a rate of 15 degrees per hour, and the full tour is going to last about three hours.

In Europe, South/East Asia, Africa, the Arctic, and in the Pacific, Atlantic, and Indian Oceans it starts on September 28, 2015. In the US, Canada, and Central and South America, this Total Lunar Eclipse will begin on the evening of September 27, 2015.

When doing my planning, then it is essential knowing where the sun sets and the moon rises. Here is the SolarCalc website really helpful. It virtualizes the projection, enabling me to figure out an idea position of my photography. 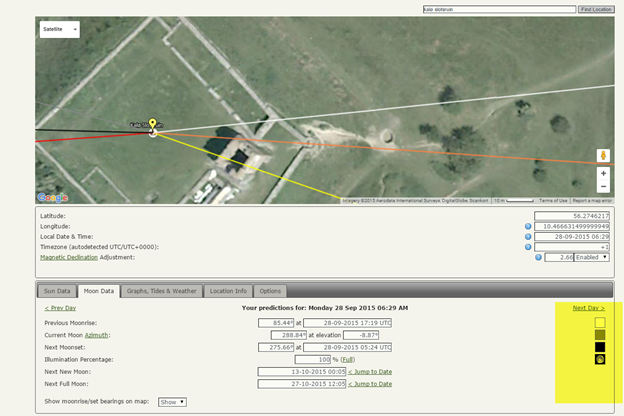 Other sites which add my planning

The moon’s color and brightness will vary enormously. A good starting point would be a basic exposure 17mm@f/2.8, ISO400 of 1/125 sec. at f/5.6 was increased to 1/8 sec. within 15 min. of totality, and then set to 4 sec. throughout totality. A second metered exposure captures morning twilight and silhouetted castle. I recommend bracketing your exposures by under- and over-exposing by one or two f/stops to ensure that you get a perfect exposure. To capture a good sequence of photos, you’ll probably want to take the bracketed series of exposures every 5 minutes. Do remember to shoot raw, as you want to correct the temperature in the post process.