Have you ever been shooting in a situation with lots of variation between bright and darker areas, a situation where you either was forced to underexpose some areas to get picture information in the dark areas, or blow other others to catch information in the dark areas. Seeking a compromise that gives the best of two can challenging, and sometimes close to impossible.

One way to work in such situations is to manually shooting a series of photos where you keep perspective by vary the exposure control. The downside is that it takes time and is inconvenient which is especially tricky when shooting a volatile scene such as a setting sun. Most modern cameras come with a feature called ‘Automatic Exposure Bracketing‘ (AEB) takes much of the hassle away, really convenient.

Bracket shooting allows you to shoot several images, each with different degrees of exposure. Specify the value of deviation (steps) from the base exposure, and the camera shoots 3 or 5 images while automatically shifting the exposure.

These photos can then be combined, blending all information into a HDR Image (High Dynamic Range). Combining these photos into a digital negative can easily be done in a free tool like Camera Raw.

Many brands, among these my A99V, is able to perform Automatic Exposure Bracketing mode can work either in Aperture Priority Mode or Shutter Priority Mode.  With Aperture Priority mode you are choosing aperture you want and the the camera to make the variations in shots by varying shutter speed. AEB in shutter priority mode keeps the shutter speed you have set and lets the camera vary the exposure by changing the aperture in your shots.

You possibly know that there is three factors going into achieving underexposed and overexposed images when you bracket. You can change the aperture, shutter speed, or ISO.  You might ask yourself how to I change the behaviour of the camera, I guess the answer is almost the same from camera to camera, not all will be able to bracket on ISO, however newer and more advanced cameras possibly are .

On my true love the A99V bracketing is depended on its operation mode.

Program and Manual mode is a bit more hairy.

There is an important side note to these behaviours. If you make your camera exide its operations parameters, you will receive no errors, the camera will simply continue bracketing and shooting as nothing happened, only will its setting not change.

What about bracketing and flash

When I tested my camera with bracketing with flash compensating I was very curious of how they implemented this.The first thing i noticed was the the camera automatically shifted from continuous drive to single shoot, at first that was a little confusing having to press the release repeatedly. Why this is this way is beyond me, a modern flash can easily keep up with the camera. More importantly how is the camera performing the bracketing, is it on ISO, Exposure or Shutter. The answer is really simple, it keeps the aperture, shutter speed  and ISO constant, and instead adjust the power of the flash that is getting adjusted.

Steady as a rock

This point is possibly going to yield some flak, and sure you might be able to shoot Bracketing by handheld, but its given you cannot hold your camera 100% steady over 5 exposures. And as an optimal result is based on the camera being steady while doing the bracketed exposures, is the optimal solution the use of a tripod. Only this way will slight movements be avoided, which otherwise could/will cause blunder when you try to merge them in HDR.

Turn of the AF-C

If there is something you don’t want, when you shoot bracketed photos to use for an HDR it is photos with different focus points. I do recommend setting your focus on MF og AF-S when doing bracketing, if you have your camera in AF-C you risk a shift of focus as the camera will refocus constantly.

There are a few situations where AEB is not the best of options. Imagine photographing fast-moving subjects, jet planes in air shows, racing or flying birds. The movement introduces issues with blending the photos back together again. You might also want to be careful with aperture bracketing if you are planning on merging into a HDR, by changing the aperture you change the range in which the picture appears sharp.

The final stage is to combine all images in CameraRAW.  You can do most things in Camera Raw, and really do not need to buy Lightroom nor Photoshop. I use the built-in HDR merge feature present and it renders with very pleasing results. What is left is a few minor tweaks, such as adjusting saturation and contrast and suddenly you’re left with a photo which is streets ahead of anything you could achieve with just a single shot. You will find that all areas of the photo are well exposed, and the basis for a better shoot is achieved. 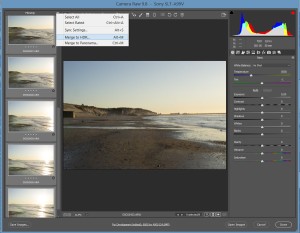