Viewing the word through Ethereal monochrome glasses. Black and white images take us back to where photography began. Creating monochrome images is photography in its simplest, raw form. They are uncluttered from the distractions of color. And thanks to digital technology, monochrome photography is easier today than ever before.

Because colors are not there to lead and please your viewer’s eyes, you need to carefully place other elements to help the audience of your photo. Give your image depth and definition by thinking lines, patterns and textures. You might think you need to shoot at a stunning location to create a unique stunning picture. In my opinion stunning photos is achievable in most places. Often it is hidden right there in front of you, differ yourself from how other take the photo, have you considered all angles and viewpoints? Try moving from a standing position to a point of view down at street level, then shoot the same photo from there… what happened?

Observe the natural direction of the light – Monitor how it changes during the day and with varying weather conditions. Identifying strong shadows, tones, textures and shapes will be integral to the monochrome image. Artificial light sources such as street lamps and torches can be useful as you will not have to worry about creating unwanted color casts.

Don’t worry so much about noise, grain can be your friend in black and white photography. The example here is shoot at ISO 6400, hand held at night in the Seattle streets. 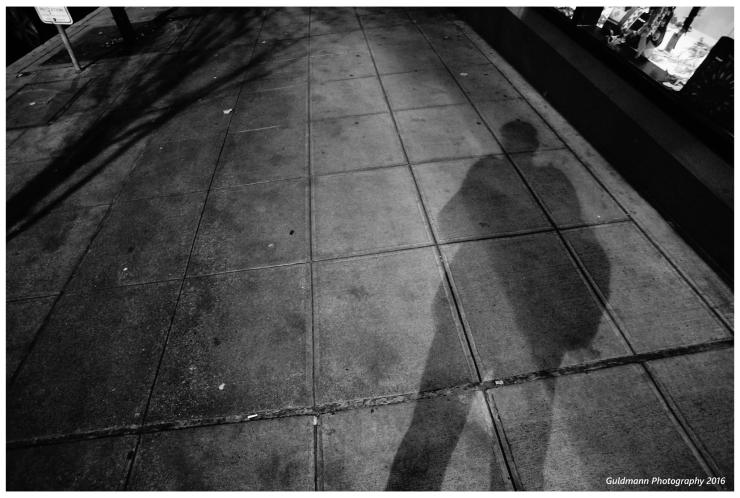 As I wrote in stepping up at black and white is it important to set your camera to monochrome. The RAW format and your files will still be in color, but it helps you think of shadows as think of shadows as real objects and makes it easier to make them a part of your composition. Shooting with your live view on in monochrome gives and a good idea of how the tonality will be. And allows you to explore how lines work, how colors and textures is recast in B&W. It takes time to train the brain to see B/W, and getting that feel for the subject allowing for more intuitively.

Overcast days are ideal, avoid bright days Black/White photos taken in bright light often lack atmosphere and easily becomes too contrasting. Stormy skies can look fantastic; expect to work a little with the photos in post-production where adding of contrast can make a real difference. Work with the curves, do some Dodging and Burning where necessary.

With a ghostly expression

I like ethereal black and white images with a ghostly expression to them. Because the camera is mounted on a tripod is the usage of slow shutter speed measured in seconds or even minutes. This allows me to have part of the subject moving during the exposure and by that going blurry. Remember the stationary elements then need to remain sharp.

Perhaps this is why I especially love to shoot water, harbors, lakes, sea, streams and rivers. Water makes such great black and white photos allowing to focusing purely on the photo’s tone, texture, shape, drama, and mood is crucial on its visual impact. Reflections is great, a picture of a building reflecting in a body of water will fantastic and enhances the feel of the photograph.

Spend time on your composition, remember Photoshop is for enhancing, not fixing. Look for textures, old harbors is great for motives, look for rusty chains, old boats; you want to be cropping tight, get close for that texture. Go for simplicity, what your eye might see as a beautiful scene, will be too cluttered and confusing in a photograph, especially in black and white.

It is becoming a good habit, including work by Dylan Walker. Thus his young age he delivers rock solid quality photography, and some fine examples to this topic.

The first photo is The Kelpies. these amazing structures located in Falkirk, Scotland, are photographed every single day. Dylan explain that he wanted to get a unique shot of them, and in order to achieve he altered his point of view by setting his tripod as low as it could go and framed the two Kelpies through the viewfinder. To create movement in the sky he chose a long exposure to, and enhanced in the post processing by adding contrast, reduce of the highlights, and a little clarity.

His second example is sunset silhouetting the Groynes. He explains that he usually never really photographs mono at sunset, but this is an exception. With the setting sun silhouetted These Groynes, it really developed into a nice mono image. Again he used a long exposure to smooth out the water and also to give movement to the sky. The sky and beach looked really similar to one another which also made the image much stronger. With the composition he wanted the Groynes to look as if they were drifting off to infinity, any by shooting them at an angle and also stepped back a little he achieved to get reflections in the shot as well. There wasn’t much to-do in the In post processing, the photo was great as it was, and only a conversion to black and white was done. 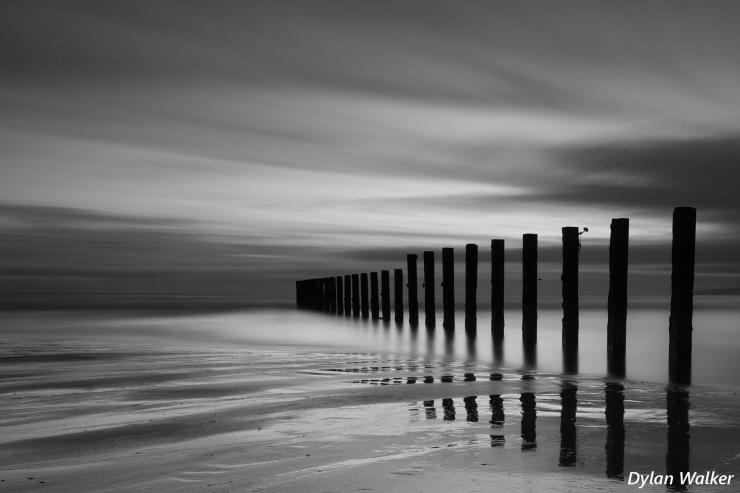 Moving on to Jetty: shot at the only lake in Scotland, Lake of Menteith. This photograph was an interesting one to take and also to process. The sky above was streaking across to the right so, again was a long exposure chosen to give them a feel of movement. Dylan wanted to focus on the jetty but also the mountains in the distance; this was done by tilting the camera into portrait mode and framed the shot. This photo needed a lot in the post processing. The image was very flat because it was a very cloudy day and the sky very over exposed. By using the graduated filter in Light room he was able to recover it. Besides these enhancements was plenty contrast added and as a final touch was a lot of clarity added to the jetty. 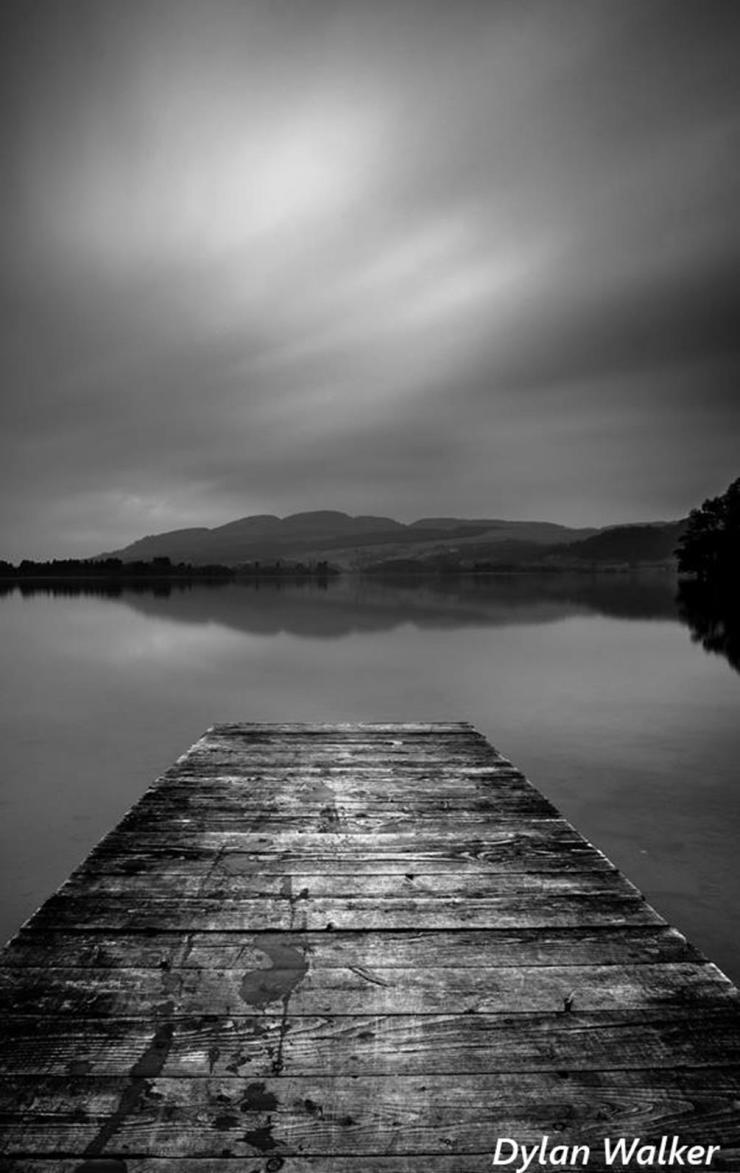 The Palisade: This dark gothic looking seascape was a difficult one to process. As he explains was the composition really in front of him, but by mistake he managed to shoot it horizontally where he should have taken it vertically. By cropping it in the post processing he was able to adjust this to the expression that he wanted for this this image. By using Silver Efex for the rocks he managed to give them a more “rocky feel” as they at first were too flat. This gave a lot of structure to them by bringing down the exposure of the sky and then selected the sea to make it whiter.

Daniel Ellwanger attaches the following words to his photo: when I took this shot I wanted to have a different way to take a shot at castle Sanssouci in Potsdam. I wanted to give it some “dark” mood. Normally people take colorful shots there. I wanted to do it differently; the clouds were perfect to create this gloomy situation around this beautiful statue. 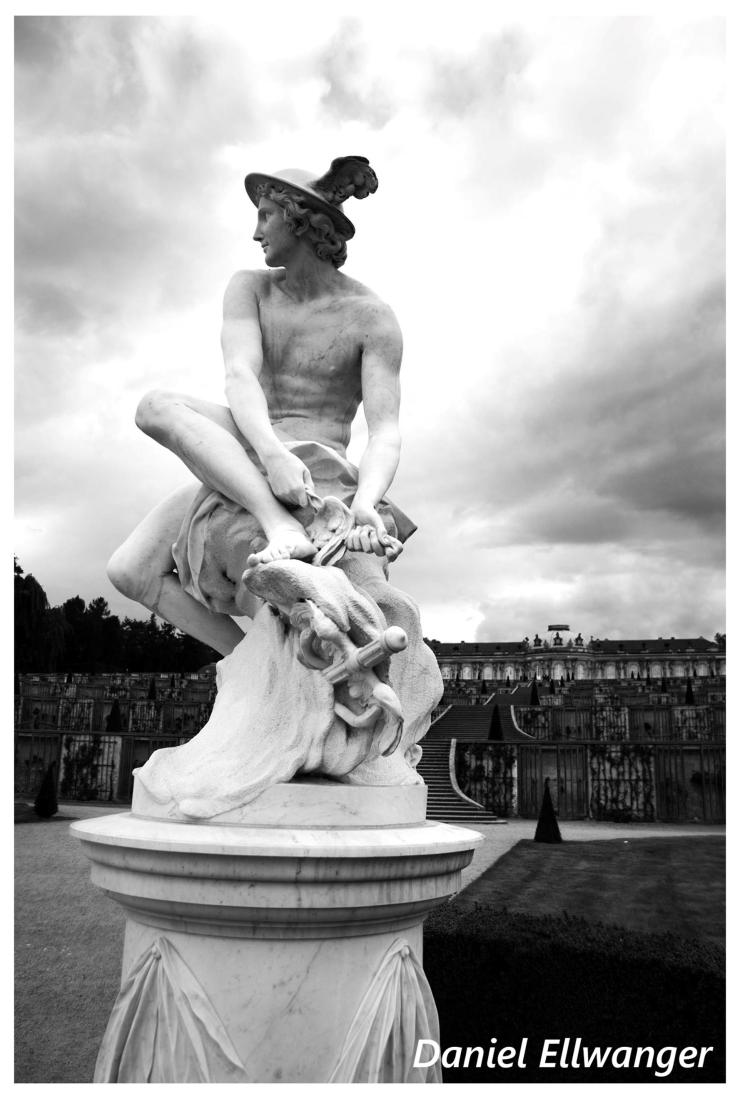