In my last blog post I had the pleasure of showing why i adore Iceland, and what a thrill that lies hidden at every side road we cross, this blog post is going to show more photos, in no particular order, from that trip.

Vik was perhaps one of the biggest positive surprises I had on this tour, I would not be surprised the least if it was possibly to spend an entire week in that area without running out of places to see, then again it comes back to my ever lasting problem with Iceland… too little time.

Along the black beach is basalt rock, with caves and waterfalls. This cave was quite large and dripping with water, you could easily fit a few houses into it. It was alive with small birds hunting for food and not least bats.

Do remember the warning from my former article, the danger is absolute real!

As you can derive from the former picture is the shadows quite long indicating an imminent sundown. The sundown’s in Iceland seems to be quite lengthy, and glides over in a lengthy nautical sunset as well. I was tempted to juxtaposition the black beach, the cave opening against this sunset. I am not sure it turned out exactly as I imagined it, but its still enjoyable. Another attempt on juxtaposition of the black beach against this sunset. The Reynisdrangar sea pillars is visible in the horizon. The beach isn’t exactly under-lit, it is just that black that it goes one in one with the shades.

Glacier Hike at the falling glacier. Attending a guide lead hike up to the ice cave (strongly recommendable tour with a guide). Its a easy walk, which can be done at any able age, without becoming too exhausted. To take this walk you need to be equipped with Teeth Claws Crampons on your boots (hiking boots without elevated heal recommended), and a helmet. 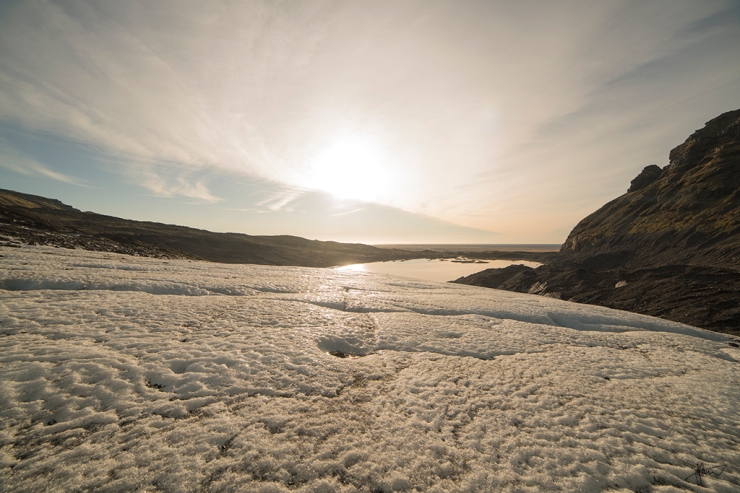 The sheer size of the glacier is beyond understanding. I  did these shoots at one of the glaciers tongs at the south Vatnajokull glacier, which covers more than 8,100 square kilometres or more than eight per cent of Iceland and is estimated to have a volume of 3300 cubic km.

The parts of the glacier we got to visit is infinite little, the lower parts is fairly accessible (be careful of the moulins), but as soon as you get higher up, the sea of ice raises, and things rapidly becomes a lot more technical.

Take much chare when walking onto a glacier. Even though it seems sturdy is it very treacherous. Moulin forms as vertical to nearly vertical well-like shaft within a glacier or ice sheet which water enters from the surface. They can be up to 10 meters wide and are typically found on ice sheets and flat areas. There is a huge one in the middle of the next picture.

Svartifoss, A short walk (3 km, uphill) into Skaftafell National Park in South Iceland leads to a breathtaking view of Svartifoss.  The foss is fed by ice-cold meltwater from the Svinafellsjokull glacier and tumbles down 20 metres over a cliff which is bordered on both sides by tall black basalt columns. Unfortunate we arrived that late in the day, that time didn’t permit for getting all the way down to the Foss. Here the fall is seen through an Meyer Orestor 135mm lens. 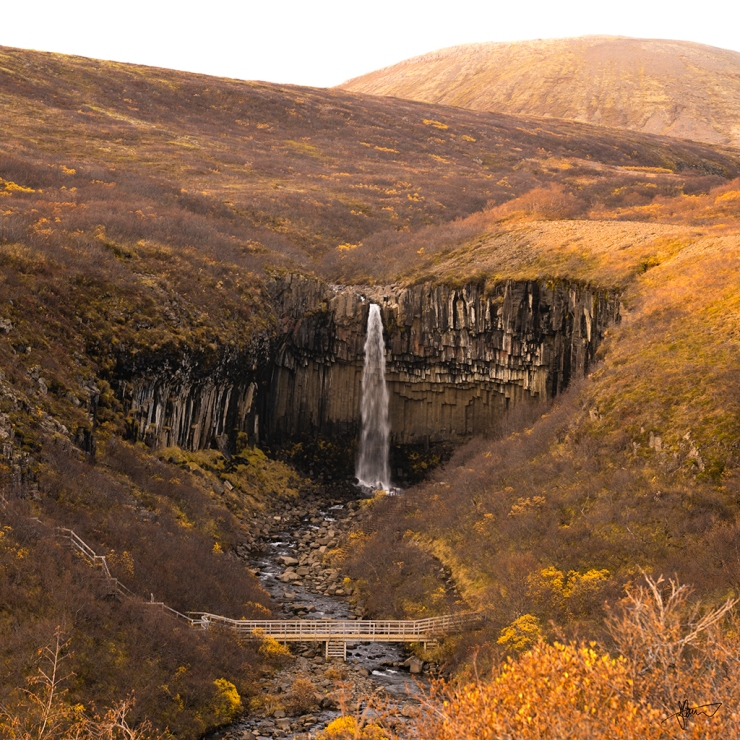 A random stop on the way, stopping for a stretch leg is always a good idea. Instead of staying at the car, take a small troll away from the road. This seaside opened op in front of us, the skies was an amazing backdrop. There was no fences to climb, no sign of no entry to ignore, only nature and lots of it.

A random stop on the way, waterfalls is pretty much everywhere. Not bringing a tripod would be a crime. Exposing water falls a little longer than you can hold the camera for, gives this illusion of the flow of water.

A random stop on the way. Near Laki we came a cross an islandic sheep herding with his dogs. The heelers kept pushing the sheep forward and it was amazing to see how they got controlled.

A random stop on the way. Stacking stones has happened in Iceland for several reasons. Historically its been a way to create way markers. At this location for some reason people are stacking the stores for whatever reason, giving a really surrealistic impression.

5 thoughts on “Iceland – the land of light – Second”